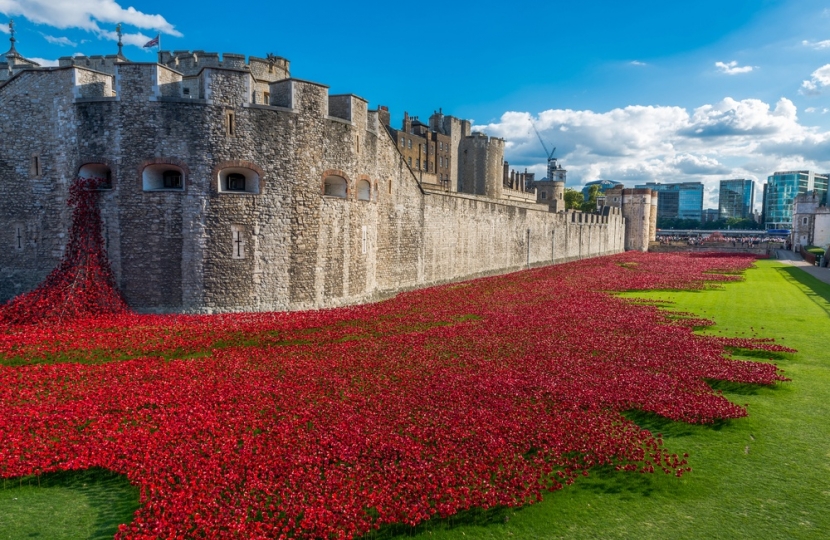 To ask Her Majesty’s Government what plans they have to commemorate the contribution of Britain’s musicians, artists and poets to the First World War.

Lord Black of Brentwood (Con): My Lords, I begin by declaring an interest as a trustee of the Imperial War Museum and a member of the council of the Royal College of Music, and by thanking all noble Lords who have taken the time to join in this debate today.

There have been some remarkable acts of commemoration this year, to mark the grim centenary of the outbreak of a devastating war. Like others here, I suspect, I shall never forget being in Westminster Abbey on 4 August, when the candles went out one by one until we were left in darkness to remember those who had made the ultimate sacrifice. Many thousands of such acts of solemn commemoration, the length and breadth of the land, have allowed us all opportunities to remember the destruction of those years, the gallant fallen, the slaughter of the innocent and the pity of war. But as we draw to the end of this year, I want us for a moment to remember a special group of people who contributed not just with their blood but with their creative energy.

For our country on the eve of war was brimming with the talent of a generation of artists, poets and composers—a promise that all too often found its apotheosis not in the concert halls and galleries where it should have but in the trenches. We should never forget those young men who, finding themselves at the extreme edge of human experience, sought to convey the horror they saw in words, images and sounds.

The most obvious manifestation of this creative energy were the war poets, an entirely new phenomenon, unique to this conflict. From the very moment on Easter Sunday at St Paul’s in 1915, when Dean Inge read out these words:

“If I should die, think only this of me; That there’s some corner of a foreign field That is for ever England”, a new form of artist—the soldier poet—was born. In the following years, Rupert Brooke, the author of those lines, Siegfried Sassoon, Wilfred Owen and many others brought direct to millions the horror of war in a way that perhaps only poetry can. Those names were, in so many ways, the tip of an iceberg. According to Catherine Reilly’s exhaustive bibliography, some 2,225 poets from Britain and Ireland wrote war poetry during those years, alongside many hundreds more from what are now the Commonwealth countries. The significance of their output was perhaps best summed up recently by Her Royal Highness the Duchess of Cornwall, whose three great-uncles were killed at the Somme within six weeks of each other.

“Poetry is like time travel”, she wrote, “and poems take us to the heart of the matter”.

In this commemoration year, we should salute the many imaginative ways found in schools, on Underground trains and through social media to ensure that we remember the heart of the matter.

As harrowing as the poetry of the war were the paintings depicting its slaughter. A remarkable canon of war art began when many Belgian artists fled into exile in London in 1914 and started to recreate in art the appalling story of the ravage of their country. Inspired by their courage, many British artists volunteered for service, most joining the Artists Rifles. In 1916, the first official war artist, Muirhead Bone, was commissioned by the Foreign Office. In an extraordinary six-week period alone, he completed 150 drawings, depicting the ruination of the French countryside. It was, he said, “war as it is”.

As well as Bone, a young generation of artists with front-line service experience was similarly commissioned, among them those who would shape modern British art for decades: Paul Nash, Percy Wyndham Lewis, William Roberts and John Singer Sargent, whose extraordinary painting “Gassed” sums up so much of the horror of the trenches. Like that of the poets, their work bringing home the pity of war is readily available to us today. Much of it can be seen at the Imperial War Museum and, particularly this year, in galleries across the country. Many of them are running special exhibitions for this commemorative year.

The names of many of these artists and poets are very familiar to us all, but considerably less well known is the response to the war of classical musicians. In his director’s address shortly after the outbreak of the war to students at the Royal College of Music—then, as now, home to some of the most remarkable musical talent—Sir Hubert Parry, who himself in 1916 composed in just one morning for the Fight to Right movement perhaps one of the most famous of all British works, “Jerusalem”, had this to say:

“One thing which concerns us deeply is that quite a lot of our happy family party have been honourably inspired to go and chance the risks of a military life; and among them are some very distinguished young musicians. We feel a thrill of regard for them ... But then we must also face the facts with open minds. The College in relation to war is in a different position from other educational institutions. Our pupils ... are gifted and rare in a special way. Some of them are so gifted that their loss could hardly be made good”.

The audience that day would have included such talented students as Ivor Gurney, Arthur Bliss and Herbert Howells. Gurney returned after 15 months at the front, having been shot and gassed, but with five of his most enduring songs in place, some written practically at the front line. Some golden talents—those whose loss could “hardly be made good” such as George Butterworth—did not return to the Royal College of Music, along with many other fine musicians at other institutions, such as Ernest Farrar, Willie Manson and Cecil Coles.

Those who did return, shattered from their experiences, proved to be in the vanguard of a renaissance in British musical life in the post-war years, joining many more established composers who were too old or unwell to have served. They produced an extraordinary set of works commemorating the devastation of war, from Frank Bridge’s “Lament” to Gustav Holst’s “Ode to Death” to John Foulds’s epic “World Requiem”, which required a remarkable 1,250 performers.

In a year when it is right to remember the sacrifice of individuals as much as the scale of the horror that unfolded, I will highlight one small individual musical tragedy of the war. Sir Edgar Speyer is not a household name, perhaps because so much effort has been made to expunge his name from the history books. An immigrant to this country from Germany, Sir Edgar was an eminent philanthropist, a friend of Asquith and Churchill and a member of the Privy Council. It was his generosity before the war that single-handedly saved the Proms and guaranteed their accessibility to a popular audience. He was a patron of many early 20th century composers and, in another walk of life, he funded Scott’s expeditions to the Antarctic. Because he was of German birth, however, this remarkable man who gave British life so much fell from grace in 1914. He was eventually hounded out of Britain with his honours and even his British citizenship stripped away. A century on, when we can look back with calm perspective on some of the events that happened in the heat of the moment, it would be right to ensure that the record is set straight and that the contribution to music, science and the arts of this man, who was so unfairly treated, is properly recognised with a fitting memorial. I hope that this might be something that one of the many institutions—those that are so finely taking the events of a century ago and placing them in a modern setting—might be prepared to take on.

I hope that, in my opening remarks, I have been able to set out just a little of the flavour of the extraordinary contribution that so many artists, poets and composers made to the war; and how those who survived used their experiences of that horrible conflict to spur an artistic renaissance in our country in the years afterwards. Out of great evil, some good did come. Across the country, their work—not least thanks to the enormously successful Centenary Partnership of organisations, with the Imperial War Museum at its centre—is being recognised, remembered and refreshed for a new generation. I am delighted that 14-18 NOW, established by the Government, has taken its inspiration from this and is commissioning new large-scale projectacross all art forms to encourage people from every community in the land to build a legacy that will last another 100 years.

It is usual in these debates to have something of a shopping list for the Minister. Today I am in the happy position—I hope that means he is in a happy position as well—of not really asking for very much. The Government, through their imaginative support of so many organisations and with the support of all parties in Parliament, have played a vital role in making this year a phenomenal success. Today I ask my noble friend simply to join me—and, I am sure, all the rest of us—in remembering the contribution and sacrifice of so much creative talent in the First World War, to congratulate communities up and down the land on marking that contribution, and to pledge to continue to support artistic and musical projects that ensure that we never, ever forget.