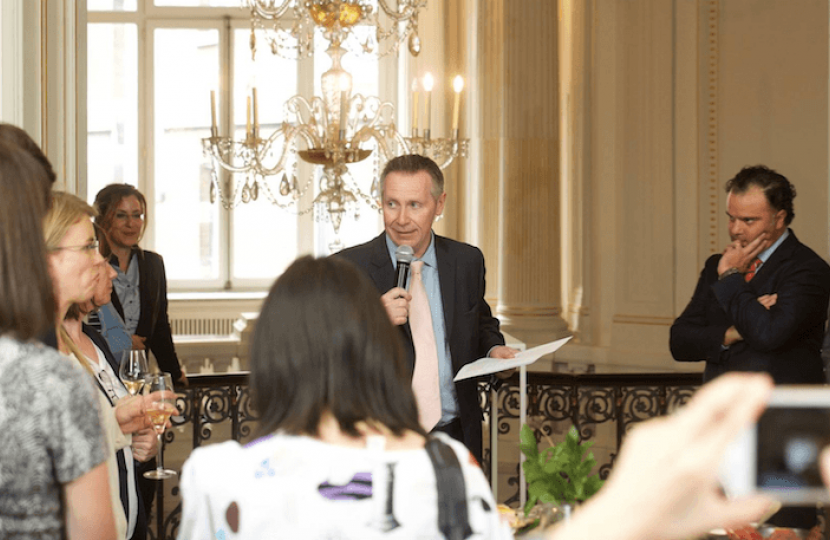 Lord Black, Vice-President, of News Media Europe spoke at its launch event in Brussels. He said:

It is a very great pleasure to have a few moments to speak at the launch of News Media Europe. As Fernando has just said, this is a really exciting new venture which has been born of the energy and dynamism of the modern news media industry across Europe – from Stockholm to Nikosia. We will bring to our lobby work in Brussels the same vitality and excitement which is transforming all our businesses in an age of global competition, and opening up endless opportunities.

But although we live in a new, constantly changing world, one central truth about our businesses has never, and will never, change.

And that is the essential role of an independent, inquisitive, free news media in protecting and sustaining democracy, and the vital importance of respecting freedom of expression. Freedom of expression is the foundation on which European democracy, and European civilization, is built. It is the guardian of every other individual liberty we as European citizens take for granted – of thought, conscience and prayer, of the judiciary and the right to a fair trial, of free assembly. Where the press falters, either because of a direct attack on free speech or more likely in such a competitive world because it has failed commercially, then the quality of our democracy suffers. That is why News Media Europe is so passionate about this, and why our central mission- central to everything we will do - is to be vigilant in safeguarding it.

And that is a very demanding task. Despite the constitutional guarantees for free speech in the European Convention of Human Rights and elsewhere, freedom of expression is constantly under pressure throughout our continent.

That pressure comes in three very different forms. The first – most brutal shameful – are physical assaults on editors and journalists. We saw this in its most shocking form with the attack on Charlie Hebdo and the terrible loss of life. Those journalists died in the name of free speech. But we have also seen incidents in other countries which adhere to the European Convention on Human Rights, including Russia, Bulgaria and Turkey. An assault on any journalist is an assault on free speech, and – working with international organisations – we must do all we can to highlight them and ensure they are tackled.

The second form is also easy to identify – and that is a direct assault on the press, and attempts to impose formal legal controls on it by Member States themselves. We have seen threats against basic press freedoms in Hungary and Bulgaria, and elsewhere in the Eurozone hostile action against journalists in Slovenia. It has also happened in recent years in the United Kingdom, where Government has been trying to impose the first set of statutory press controls since 1695 – an attempt which the industry has been vigorously resisting and will continue to do so.  News Media Europe will be vigorous in seeking to help all those who come under direct assault as an attack on one of us is an attack on us all. It is our first and most important duty as an association.

Dangers for editorial freedom can of course also come direct from the European Commission. This can take the form of new data protection legislation, or changes to the audio-visual media services regime, or Orwellian forms of “media monitoring”, for instance of the activities of Press Councils. It will be the job of News Media Europe to keep all these issues under the closest surveillance, to put our case effectively to the Commission and to the Parliament, and to stand up for what we believe in, working alongside our partners in other trade associations here in Brussels. We often have to fight on many fronts, and for News Media Europe, partnership is going to be the key to the future. That’s why it’s great to see colleagues from the EPC, from EMMA and from the News Media Coalition here.

The third way in which the free press can be undermined is much more difficult to see and to touch because it is an attack by stealth on our commercial success. Our members are all private sector companies for whom commercial success is of course important in its own right. But much more significantly, it is vital because the press can only be free if generates the revenues and the profits to invest in high quality journalism, in investigative journalism, in nurturing young talented writers, and in the new technology that allows citizens to access what we write.

To be successful in a global news environment, we need the freedom to go about our business without undue interference in our commercial operations. We need the minimum of red tape which is the enemy of enterprise. We need a level playing field with new entrants to the news media market to allow us to compete fairly. And we need a tax regime that encourages investment in new technology.

In practical terms, that means we want to make progress on the issue of VAT with the aim of allowing Member States the possibility of applying zero, super-reduced or reduced VAT rates on electronic publishing while maintaining the existing regime for legacy products. It means we must maintain a stable copyright regime that not just protects freedom of expression and the rights of consumers but above all encourages investment in content. And it means that there must be fair competition with the giant technology platforms such as Google, Facebook, Twitter and others to ensure we can compete freely.

Ladies and Gentlemen, at the start of this Commission, Commissioner Oettinger set out a mission dedicated to the “development of creative industries and of a successful European media and content industry able to reach out to new audiences, adapt to the digital era and thrive in the connected Digital Single Market” and create jobs.

News Media Europe wholeheartedly endorses that vision from the Commission of a vibrant, energetic, flourishing creative industry in Europe. Those aims underpin all our work, too. But to deliver on it, we need to protect and enhance the editorial and commercial freedoms that are the bedrock of our industry. That is our mission, and we look forward to working with you all in achieving it.

More information about the NME can be found on their website.