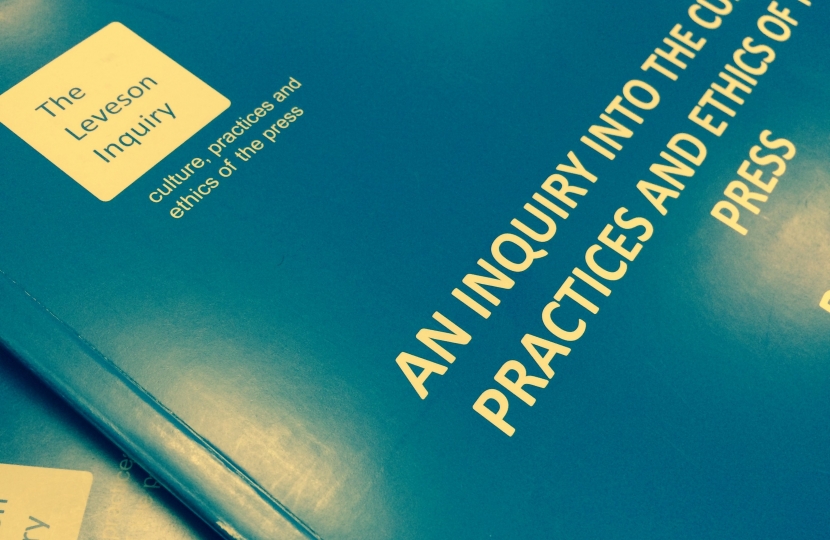 ‘Leveson’s Illiberal Legacy’ - a report authored by free speech experts - was today published and for the first time critically assesses the conduct, findings and failures of the Leveson Inquiry and its legislative aftermath.

Its publication comes just weeks before the implementation of the Crime and Courts Act.

Lord Black who is a passionate defender of press freedom in the UK and across the Commonwealth spoke at the launch event. He told the audience that:

“The Leveson Inquiry left a toxic legacy – namely the imposition of the first set of state controls on the press in this country in more than 300 years – that are about to come a reality.

“On 3rd November, the press will be singled out for special legal treatment for the first time since 1695 when licensing controls lapsed.

“From next month those controls [because of the Crime and Courts Act 2014] will be back in all but name, because publishers, newspapers and magazines who are not signed up to a regulator whose rules the Government has set out – that’s statutory regulation – will be liable for punishment through the award of exemplary damages against them in libel and privacy cases and the shifting of the costs burden so that newspapers may have to pay the other side’s costs even if they win….Just think how odious that is in a free society – you can punished for honesty.”

A copy of the report's press release is below:

‘Leveson’s Illiberal Legacy’, a major new report into the findings of the Leveson Inquiry and the subsequent legislation passed to implement Leveson, has found major breaches of the right to free speech that may significantly erode press freedom in the UK. The report, backed by the Free Speech Network, and advised by some of the key freedom of expression campaigners behind the Libel Reform Campaign (now at consultancy 89up), lays bare the myth that Leveson protects human rights and shows instead how it could curtail fundamental human rights and freedoms.

The subsequent legislation passed by Parliament, with no consultation and, as the report outlines (for the first time) in just 13 hours and 5 minutes, is unfit for purpose. The report shows how the imposition of exemplary damages and punitive costs on newspapers who fail to join a state-recognised regulator, made possible by the new legislation, may breach articles 6, 10 and 14 of the European Convention on Human Rights. It demonstrates the chilling effect these measures are likely to have on investigative journalism of all kinds.

The report argues the impact of this may be felt not just in the UK, but overseas as  repressive regimes use the precedent Leveson sets to impose punitive legislation and state-sponsored licensing systems on their media.

“The impact of state-sanctioned regulation on our precious local newspapers would be uniquely harsh and spectacularly unjust. They cannot afford the financial and regulatory burden it would impose. And why should they shoulder such a burden? They committed none of the crimes that provoked the Leveson Inquiry. They serve their communities brilliantly. Surely they deserve our protection: their demise would impoverish local communities and cripple local democracy.”

Helen Anthony, an author of the report, and expert on Leveson said:

“From November, newspapers not signed up to a state recognised regulator could be hit with exemplary damages in libel and privacy proceedings. Shortly afterwards, punitive costs awards could be made against newspapers sued for similar proceedings, even if they have broken no laws. This is deeply unfair and prevents free speech.  This is bad law, and it was made in a rushed, undemocratic manner.”

Mike Harris, co-author of the report and a free speech expert said:

“Hacked Off and the other proponents of the Leveson regime have entirely ignored the concerns of people across the globe who look at the end of 300 years of press freedom in the UK and express dismay at the example this sets to ruthless dictators and tyrants. If the state gives its backing to a press regulator here, it will mean a Russian oligarch can sue a local newspaper digging into how he made his money. All of the oligarch’s legal fees may have to be paid for by the local newspaper. How can this be fair?”

‘Leveson’s Illiberal Legacy’ was launched at 9am on Thursday 15 October.

The report was sponsored by three publishers: DMG media, News UK and Telegraph Media Group on behalf of the Free Speech Network.

The report was undertaken by free speech experts Helen Anthony, a legal policy consultant,  and Mike Harris, Sashy Nathan and Padraig Reidy of 89up with a foreword by Professor Tim Luckhurst.

Helen Anthony is a non-practising solicitor, Leveson expert and the author of English PEN’s The Alternative Libel Project.

Mike Harris is CEO of 89up and was former Head of Advocacy at Index on Censorship. He managed the Libel Reform Campaign to reform the archaic law of libel and has run campaigns defending free speech in some of the world’s least from places from Azerbaijan and Belarus to Burma.

The report is avaliable here