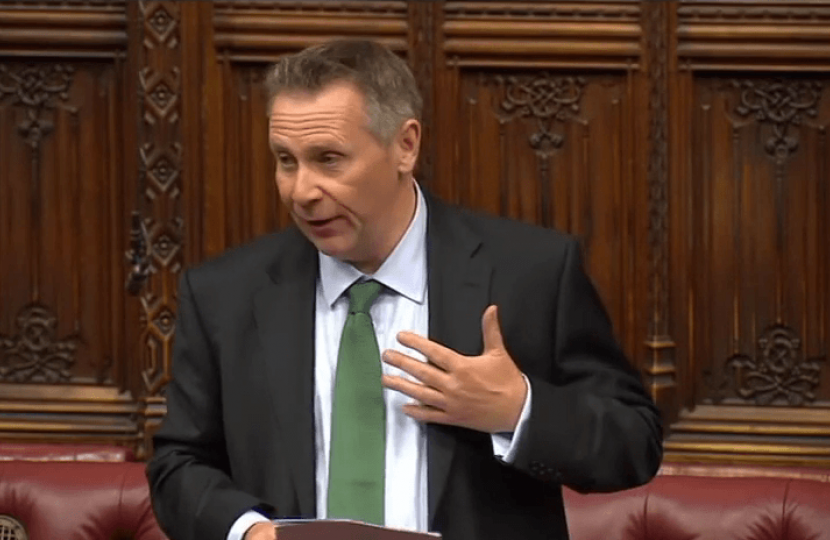 On 5th September, Lord Black led a debate in the House of Lords asking the Government what plans it had to move to eliminate HIV in the UK. This is the text of his speech.

My Lords, I am honoured to lead this debate on what remains a profoundly important issue of public health: tackling the spread of HIV and doing so in a way that over time would allow us to eliminate the virus, which has been responsible for so many deaths and so much suffering. I thank all noble Lords for taking part.​

It is just over 35 years since the first reports in the US media of an unidentified illness that seemed disproportionately to affect gay men and to kill them. What was identified as the human immunodeficiency virus, an incurable disease, left a generation of those infected facing certain death. Many more living in its shadows had their lives shaped by it. However, 35 years on we have turned the horror of HIV/AIDS from a death sentence into a manageable chronic condition through the use of antiretroviral treatment. That we can today even begin to contemplate its elimination is a tribute to many brave and visionary people. There is not time to name them all tonight but I want to make two exceptions. The first is to praise the campaigning groups, especially the National AIDS Trust and the Terrence Higgins Trust, which fought tirelessly to keep this issue on the front line of the public health agenda. The second, on this very important day for him, is to recall the vital role that our new Lord Speaker played in the earliest days of this epidemic. As Secretary of State Fowler, he showed enormous courage in tackling the issue, and in doing so saved thousands of lives. Our gratitude to him is eternal.

As we know, HIV is a massive global issue, but it also continues to be one of the fastest-growing serious health conditions here in the UK, with an estimated 6,000 new diagnoses—115 a week—and the rate of new infection is increasing. The year 2014 saw the highest ever number of men who have sex with men diagnosed with HIV. Some two-fifths of people were diagnosed late, long after they should have started treatment. One in six of those with the virus still does not know their status and, for many of the 104,000 people living with HIV, economic hardship, stigma and discrimination are all too real.

So if anything, despite the huge life-saving advances in treatment and care globally, the situation here in our own back yard, particularly with regard to testing and prevention, is deteriorating. We need to take tough and determined action to reverse the tide, and that will require a strategic approach from the Government to tackling every aspect of HIV, with the aim of eliminating the transmission of the virus in the UK and bringing its reign of terror to an end.

For the first time we have the ability to do just that because we have at our disposal the means to stop transmission. As a study published last month showed, it is nearly impossible for someone living with HIV to pass on the virus if they are undergoing effective antiretroviral therapy and have an undetectable viral load. This is of profound importance in producing a strategy for tackling HIV, as we have seen in other countries. A recent study about HIV in Denmark, from the University of California and Copenhagen University Hospital, provided the first unambiguous evidence of the link between high rates of viral suppression and falling HIV incidence. Because of the Danish policy of treatment as prevention, HIV incidence among gay men—still the group most at risk—is now so low, at 0.14% a year, that it almost meets the annual incidence rate that the World Health Organization has set as the threshold for eventually eliminating the epidemic.​

There is no reason why such a remarkable success should not happen here, given that we have exactly the same tools to use. To do so, however, three things must happen. First, self-evidently, to cut transmission through the effective use of antiretrovirals, those who have the virus need to know about it and get on treatment. Far too many still do not, with devastating consequences. It is a terrible statistic that over 80% of all HIV transmissions in the UK are from the undiagnosed. We need a step change in the volume of tests that are undertaken regularly by those at greatest risk, and in access to testing. Yes, there has been much good progress and innovation—the introduction of home-testing kits, for example—but it is not enough. There should be much more routine testing of populations at risk, and more support needs to be given to GPs and primary care providers, and indeed to local authorities, to deliver it. Of course there is the continuing need for publicity to explain its importance. I pay real tribute to the extraordinary example set by His Royal Highness Prince Harry, whose live broadcast of his own HIV test has done more than anything else in recent times to raise the profile and make HIV testing the norm.

Secondly, one of the major reasons why people do not get tested is that they fear the stigma of a positive result. The 2015 People Living with HIV Stigma Index revealed a continuing problem with HIV stigma and discrimination, with too many people reporting everything from verbal harassment or physical assault to exclusion by their families. Given the crucial role of stigma in encouraging testing, there is a strong case for a public information campaign to raise awareness and tackle some of the myths that still exist. I also commend to the Government the recent NAT report Tackling HIV Stigma, which draws together international best practice.

Improving education about HIV and sexually transmitted illnesses more generally would also be of real benefit, especially as the increase in HIV incidence among young people is particularly sharp, up 70% in the last three years. It is time to look again at what is being taught about this issue, particularly as Department for Education guidance is now 16 years old. It is really important for young people to understand about HIV and to learn how to avoid it through condom use, but also to be taught the importance of being supportive of those living with HIV and not to fear or stigmatise them.

Finally, while improved testing and tackling stigma would help to identify those who have the virus and get them on treatment, the flip side of the same coin is preventing HIV by using medication to protect HIV-negative people from acquiring it. Again, we have the tools to hand in the shape of pre-exposure prophylaxis, or PrEP. Two studies, including the PROUD trial here in the UK, show PrEP to be highly effective at preventing HIV infection in men who have sex with men. Properly taken, the success rate is well over 90%. This is a revolutionary development in the fight against HIV which can transform the public health landscape. Only this week, new statistics from San Francisco showed that it had cut its rate of new infection by a third in the past three years as a result of PrEP.

Inevitably, as PrEP is a drug linked with sex, it has become the subject of controversy and misinformation. It is argued that contracting HIV results from a lifestyle  ​choice and that it is not appropriate for the NHS to pick up the pieces from such actions. This ignores the point that the NHS is treating, curing and preventing illnesses diagnosed from lifestyle choices all the time—cigarette smoking, overeating, overdrinking or riding a bike without a helmet—and PrEP should be no different.

The other argument, of course, is money, and it is estimated that it could cost up to £20 million each year to provide. However, that figure is dwarfed by the existing cost of HIV to the NHS. The lifetime cost of treating someone with HIV is now in the region of £380,000. As people live longer, that figure will only increase. It is Mickey Mouse economics to refuse to fund effective prevention measures for those most at risk at the cost of just £400 a month—a sum soon likely significantly to reduce—when you set that against the huge cost of treating someone who contracts HIV. If PrEP prevented just a handful of infections each year, it would easily be saving money for the NHS and the taxpayer.

Regrettably, that is now a matter before the courts, but I hope that common sense will prevail and that the original decision in the case—that there is no legal impediment to NHS England providing PrEP—will be upheld. That is vital because it is the last element in the jigsaw alongside effective treatment, more testing, tackling stigma and promoting condom use, which will allow us finally to move towards the elimination of HIV transmission, something genuinely within our grasp.

Earlier this year, the UK, as a member of the World Health Organization, committed to the goal of eliminating hepatitis C—another deadly condition—by 2030. NHS England is now working on plans to make that goal a reality through prevention, testing and treatment. We must have the same ambition for HIV. I ask my noble friend whether the Government will be as bold with HIV as they have been with hepatitis C, commit to the elimination of new transmissions by 2030 at the latest and work with NHS England on a strategy to achieve that.

Thanks to the miracles of genetic science, we now know where and when HIV began. We do not yet know when it will end, but end it must, and tonight’s debate should be a staging post on that journey. In memory of the countless millions who have died, in deep honour of those who have pioneered treatment and dispensed loving care and in solidarity with those living with the virus, let this country have the ambition to show the way in consigning the greatest public health peril of our age to the history books.