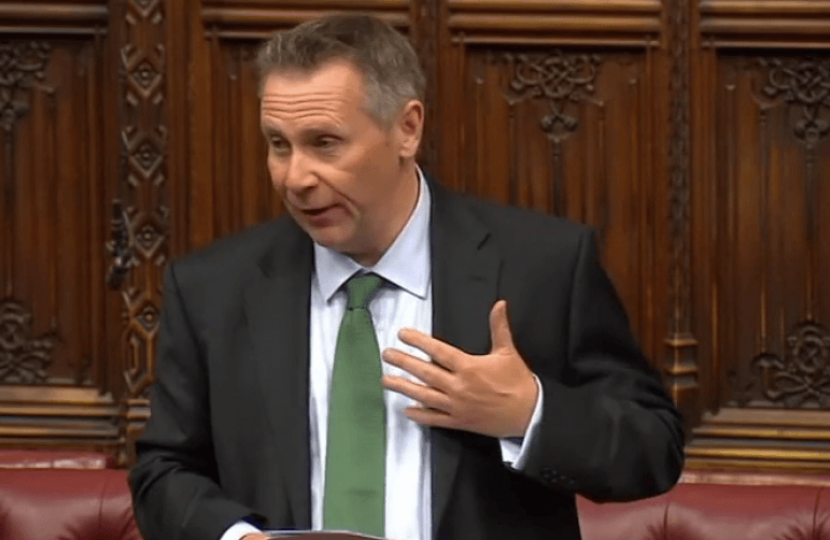 During a debate in the House of Lords on the Government's plans contained in the Health and Care Bill to ban advertising of High Fat Salt and Sugar (HFSS) food, Guy said that - while he supports the Government's aim to tackle childhood obesity - he was "wholly opposed" to the proposed ban.

He said that it was "disproportionate and based on scant and frankly implausible evidence", and added that it would seriously damage the creative economy and set a "hugely dangerous precedent for the Government to interfere with advertising freedoms."

He further told the House of Lords that the fact that the "platforms have a significant audience of children, because that is where children go to get their news, but ... will not be impacted [while] news publisher websites [which] have only a de minimis child audience but will suffer directly as a result of this policy—at a time when the entire industry is under great stress.... is 'voodoo economics'."

He called on the Government to think again; but if they refused to do so, he said they should amend the Bill to ensure it was practical in the "real world" of media and advertising.

The full text of the debate is here.

The full text of Guy's remarks is below:

My Lords, I will speak to Amendment 245, tabled by my noble friend Lord Vaizey, and to others in this group to which I have added my name. I declare my interests as a director of the Advertising Standards Board of Finance and deputy chairman of the Telegraph Media Group, and note my other interests in the register. I am also a vice-chairman of the ITV APPG.

This does not need repeating: I support the Government’s aim to tackle childhood obesity, but I am wholly opposed to their proposals to tackle it through an advertising ban. I believe that even now, at the 11th hour, they should think again, because it is disproportionate and based on scant and frankly implausible evidence. It will damage the creative economy, which is already under such stress, and it will have unintended consequences, like so much legislation that impacts on the media.

Also—and this is a very important point—it sets a hugely dangerous precedent for the Government to interfere with advertising freedoms, which are a fundamental aspect of freedom of expression. This is bad legislation.

As we have heard so often, the reduction in calories will be minimal, but this ban will take £200 million out of the media and creative industries when they can ill afford it and when they are in a life-and-death struggle with the all-powerful platforms. My noble friend Lord Bethell said that it would take out only 8% of revenues. When you are in day-to-day combat with the platforms for advertising revenue, 8% of revenues is a huge amount of money. More than 265 news media outlets have closed over the last 15 years, and many more will follow if the burden of regulation is increased, not cut in the way it should be.

This ban will not impact just broadcasters; it will disproportionately affect news publisher websites, too. This blunderbuss of a ban will reduce freedom of choice for advertisers and harm the ability of news media publishers to monetise content online, which is crucial for their long-term survival. At the same time, astonishingly, it will allow the tech platforms to continue to derive enormous amounts of revenue from HFSS advertising.

Here is the great irony: the platforms have a significant audience of children, because that is where children go to get their news, but they will not be impacted. News publisher websites have only a de minimis child audience but will suffer directly as a result of this policy—and they will do so at a time when the entire industry is under great stress, as countless reports, including the Government’s Cairncross and Furman reviews, the report from our own Communications and Digital Committee and a comprehensive report from the CMA, have demonstrated. In winding up, could my noble friend explain why news publishers are caught but the platforms are not? It is, as somebody famously said, “voodoo economics”.

Even at this late stage, I hope the Government will think again and drop these ill-thought-out restrictions. In case they do not—I am a practitioner of the art of realpolitik and I know this ban may end up going through—as we have heard from a number of noble Lords, we must at least make sure the policy is workable. That is the job of this House and this Committee because, at the moment, the measures are not fit for purpose.

As noble Lords know, during my career I have had one or two encounters with the issue of regulation, and I am clear that, for regulation to work properly, it must have a number of inherent qualities. First, you cannot rush regulation. Stakeholders from those affected need to have their input and they need time to adapt. That is what the amendments in this group, starting with Amendment 245, are all about. This is not just delay for delay’s sake; it is delay because that is what the real world demands. When this Bill becomes law, that is just a starting point. As my noble friend Lord Vaizey said, you have to designate a regulator, then the regulator has to implement it and there has to be public consultation on code changes. That long process could easily take the rest of the year and possibly longer.

Once that is all complete, in the real world, advertisers, agencies and media owners will need time to assess how the system is going to work in practice. This is a very complicated part of the creative economy, as the noble Lord, Lord Clement-Jones, said. You cannot just flick a switch and expect everything to change at once. It will take at least a year for all those involved in the advertising supply chain to adapt, review processes, set new legal procedures in place and so on—leaving aside the impact on the creative aspects of their work. That is why I genuinely believe that this Bill must not come into force until one year after the final publication of the rules and guidance from the appointed regulator.

A judicious approach to implementing the rules is one characteristic of sensible regulation. Another is certainty, which is what Amendment 247 and others are about. The Bill quite rightly focuses on ads where an identifiable HFSS product is shown, with brand advertising and sponsorship exempt. I applaud that, but the Bill is not crystal clear on the point. Within the creative industries, there is a huge amount of uncertainty, which is the enemy of effective regulation, about what is and is not permitted. I believe the terms of the exemption should be set out in the Bill, not least so that, if this or a future Government wish to revisit the matter, they must come back to this House to set out why they are doing it and to seek our consent. Given the potential harm this legislation could cause and the precedent it sets, that must be right.

The final aspect of sound regulation must be the measurement of its effectiveness. Regulation that does not work—and I am afraid that I am sure this will not—should not remain on the statute book simply for the sake of it. If it is found wanting—or, worse, damaging—it should be repealed. This is too important an issue to leave to chance. We should therefore know now what metrics the Government will use to measure the success of these restrictions, the definitions they will employ and how data will be collected. Will they measure the impact on the creative economy as well as on obesity? We should know. If those metrics are not met, the restrictions should fall at the end of the review period.

In the absence of dropping this legislation—I notice some reports that its demise might be part of Operation Red Meat, which we are hearing so much about, and let us hope so—our job is to ameliorate its worst aspects and ensure that it is sound and workable. These amendments do that, and I hope they will find widespread support across the Committee.