"This Armistice, let us also remember the animals who died in the Great War" - Lord Black 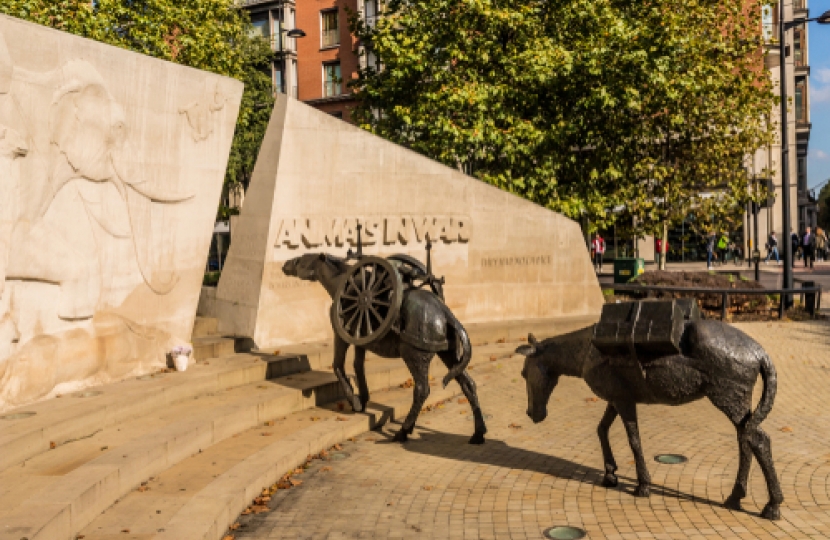 "This Armistice, let us also remember the animals who died in the Great War" - Lord Black

In a speech in the House of Lords commemorating the Armistice, Lord Black highlighted the vital role played by the animals who fought and died in the First World War.

My Lords, it has been a rare privilege during the last four years to take part in so many important debates in this House as we have commemorated the heroism and sacrifice of those who fell in the Great War. In particular, it was a privilege to lead one on the centenary of the Battle of Passchendaele and another commemorating the role of musicians, artists and poets who fell in the fighting—those special lives whose loss, in the words of Sir Hubert Parry, could never be made good.

It has also been my good fortune during these years to have been associated with the exemplary work of the Imperial War Museums, whose foundation I sit on and I declare an interest accordingly. In 2014, IWM London transformed its iconic atrium as part of a new, permanent First World War gallery, making use for the first time of the power of digital technology to engage new generations. This gallery is the richest and most comprehensive in the world, containing more than 1,300 objects, and in the first six months of opening it attracted an exceptional 1 million visitors—a figure which underlines the power of commemoration. Many millions more have visited since and taken part in some of the key events organised by the IWM, importantly including one on the vital role of women during the war. Its unique digital platform, “Lives of the First World War”, has engaged the public in a remarkable way by allowing them to contribute stories, building a digital memorial to the Great War. I hope that it helps those whom the noble Lord, Lord Clark of Windermere, talked about earlier as seeking a permanent memorial to their ancestors.

Throughout the centenary the IWM has also supported the work of 14-18 NOW, which has played its own energetic role in marking major national moments through the arts—not least through the memorable poppies tour, seen by over 4.3 million people. I pay a heartfelt tribute to both organisations and to the DCMS, which has so immaculately choreographed these last four years.

Today, as the commemorative events in this House draw to a close, I want to highlight a role played by a group which is so often overlooked but was absolutely vital to the waging of the conflict and to our ultimate victory. That is the animals who fought, were injured and died in the war, as my noble friend Lord Shrewsbury mentioned. Animals have been involved in warfare as long as men could ride a horse into battle or train a dog to attack, and they have served other purposes as well—as mascots to raise morale, and to provide companionship and comfort to those fighting. But the First World War presented the greatest challenge ever to face animals in the history of warfare, before or since, and that is why I want to remember them today.

The animals most profoundly affected were the horses that powered our cavalry. Remember that when the First World War broke out the entire British Army had just 80 motor vehicles. All other transportation of men, guns, ammunition, equipment, medicine, supplies and fuel relied on horse power and, with the mobilisation and expansion of the army, horses were required in unprecedented numbers. The British Expeditionary Force proceeded to France with 40,000 horses and mules, each one of which had to be hoisted aboard and into the holds of ships. Despite heroic efforts by the Army Veterinary Corps, for many the trauma of the journey was too much and many died during the crossing, in often terrible conditions.

Horses were then in action right from the opening shots of the war when, at Néry in France on 1 September 1914, every member of L Battery Royal Horse Artillery was either killed or wounded until the bitter end. The last cavalry charge of the war to end all wars was the charge of the 7th Dragoon Guards to capture the Dender crossings in Belgium as the clocks were striking 11 am on 11 November.

During those terrible years, horses did not just power the war, but provided vital companionship to our troops. As the author JM Brereton wrote in The Horse in War:

“On campaign, riding and reading the horse for months on end, sleeping in the open only a few yards behind the picket lines at night, and suffering the same privations, the soldier came to regard his horse as almost an extension of his entire being”.

During the war, more than a quarter of a million horses were lost on the Western Front alone. Only 58,000 were killed by enemy fire; the rest succumbed to exposure, disease and poison gas, despite the heroic efforts of the men in 1915 who, when that hideous gas first appeared, improvised gas masks for their beloved animals.

Both the Blue Cross and the RSPCA worked incredibly hard for animal welfare in every theatre of war, raising money at home to care for them and then tending to them at the front. These charities, which really came to public attention for the first time during the conflict, provided 180 horse ambulances, tented field hospitals, a convalescent depot and 13 hospitals in France to care for them. Some 2.6 million horses and mules were admitted to their care in France alone, an astonishing achievement. Then, as now, a great debt is owed to the charities that care so much for our animals.

Tragically, the Armistice did not always bring salvation for the horses that had served so valiantly. In many cases, they were destroyed rather than brought home. Perhaps worst of all was the fate that befell 20,000 war horses in Palestine. It was considered too expensive to bring them back here, and they were sold to Egypt where they were cruelly worked to death in quarries.

Of course, it was not just horses involved but other animals as well. In the desert campaign across the sands of the Middle East made famous by Lawrence of Arabia, camels were vital. During the heavy fighting on the advance to Jerusalem in the winter of 1917 alone, the British lost over 3,000 camels.

Important too was the role of dogs in the war. They performed an extraordinary number of military roles. As ambulance dogs, they sniffed out casualties on the battlefield when they were buried by debris. From 1916 they were increasingly used as messenger dogs and a special school to train them was formed at Shoeburyness in Essex. Some were sentry dogs, keeping guard duty on the horror of the Western Front. Others laid telephone wires and many served as mascots. Many of them, such as Pelorus Jack of the Royal Navy ship HMS “New Zealand”, also made good subjects for patriotic postcards, while others raised thousands of pounds for war charities. Bob at Liverpool, Prince at Crewe, and Cymro at Rhyl became well-known names.

Dogs were in high demand. Initially they came from homes in Battersea and elsewhere, but in time the War Office asked the public to send their dogs as gifts. In his excellent book on the subject, the historian Neil Storey records how one woman wrote a moving letter to accompany her dog when she sent it to war:

“I have given my husband and my sons, and now he too is required, I give you my dog”.

Our feathered friends, too, were brought into service. Canaries were used to detect poison gas but, most importantly, carrier pigeons were vital during the conflict in an age before any form of significant communication. The Emergency Pigeon Service was established to ensure a supply of pigeons to minesweepers, which were then able to send news about newly laid minefields to patrol boats. The same was true on the Western Front. During the Battle of Arras, two tanks with pigeons on board saw large bodies of Germans massing behind the hills. Within the hour, our artillery had received word of this via the pigeons and foiled the German counterattack.

Noble Lords would expect me to say a word or two about our feline friends, of course. Cats also played their part, not least in the rat-infested dugouts of the Western Front, where they did a great deal to keep down the rodent population. Often cats simply provided some companionship for our soldiers. Amid the death and despair of the front line, kittens and puppies helped to pierce the muddy gloom and were a welcome reminder of home. Cats, too, were popular mascots for ships in the Royal Navy. Many perished with their crew when ships went down, including Lyddite, the mascot on HMS “Shark” sunk in Jutland, and Togo, who went down with HMS “Irresistible” at the Dardanelles. Indeed, all animal life played its part in this terrible war.

Many of you will know or have visited the Animals in War Memorial in Park Lane, which was opened in 2004. It records the sacrifice of the hundreds of thousands of animals of all kinds who fell alongside our troops. At the conclusion of the inscription, we read movingly these words, “They had no choice”.

As we commemorate the heroism and bravery of the gallant who fought and died so that we might be free, please let us remember those who stood by them, who worked with them, who comforted them, but who had no voice or name, then or now. Let us give them that voice today, as we remember them too at the Armistice.